How long does it take to get divorced in New Jersey?

How long does it take to get divorced in New Jersey? 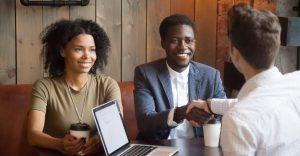 How long does a divorce take in NJ? The length of a divorce is not set in stone by any rule or law. Spouses who remain civil and mutually agree on how to divide their assets before filing can finish their divorce as quickly as the courts can process a divorce petition.

If you and your spouse are cooperative and reasonable and the defendant spouse replies quickly when served, the divorce process can be finalized in as little as six to eight weeks. This is called an uncontested divorce in NJ.

Contested divorces can be resolved quicker than many are led to believe. While many spouses begin their divorce bitterly opposed, a reasonable settlement is often reached instead of dragging the divorce out in court. Even if you are forced to settle disputes in a courtroom, all but the most bitter or financially complicated divorces can be settled within a year.

Can I get a quick divorce in New Jersey?

If by quick you mean several days or a week, then no. Even when the defendant spouse is fully cooperative from the outset (which is rare), it will take over a month to properly file a divorce petition, serve your spouse, wait for their response, and receive a divorce decree. There is no set NJ uncontested divorce timeline.

Just as all marriages are unique in their circumstances, all divorces are unique. A young couple with no children and little marital property may be able to complete their divorce in a matter of weeks. 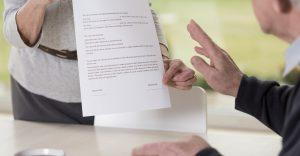 A well-established couple with a home, retirement savings, and children to fairly divide might take a bit longer to divorce.

The key to an expedient divorce is preparation and open negotiation. A great many financial and custodial issues must be clearly decided in a divorce settlement.

Can I really get divorced without going to court in NJ?

As long as your spouse is willing to negotiate, both of you can arrive at an equitable settlement that cleanly splits your affairs. If you already have a separation agreement and no longer cohabitate, this may proceed as more of a formality than a high-stakes negotiation.

How long it takes to reach an agreement depends both on how many issues there are to settle and how stubborn or cooperative your spouse is.

All marital property needs to be equitably (though not equally) divided. If there is a gross inequality in incomes, one spouse will likely need to arrive at an alimony agreement with the other.

If there are children in the marriage, custody, visitation, and child support need to be ironed out. Pensions, whole life insurance, and marital debts also need to be divided by a settlement agreement. 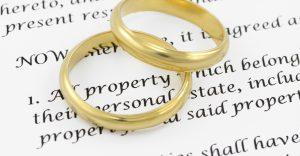 Once you are able to reach an agreement with your spouse, it is put into writing and signed and notarized by both parties.  If a divorce action has already been filed, a date for an uncontested divorce can then be made to the court. So long as the court finds that the parties’ entered into the agreement freely, voluntarily, with no duress and believe it to be a fair and reasonable resolution to all issues, the judge will not review or make any findings on the terms of the agreement.  It will then be incorporated into a Final Judgment of Divorce. Is there a waiting period to get divorced in NJ?

A blend of misperception and bad advice has led many people in New Jersey to assume there are mandatory waiting periods for divorcing couples.

This is true in some neighboring states like Pennsylvania. Draconian laws required a couple to wait 24 months if one spouse refused to consent to a divorce until 2016. Even under the revised law, an unconsenting spouse can force the other to wait up to a year for a divorce.

Delaware requires spouses in a no-fault divorce to remain separated for 6 months before a divorce decree can be granted. While they can still share a house or apartment, spouses must keep separate rooms and have no sexual relations during this time.

New Jersey does not have such broad, mandatory waiting periods. Divorce does not require the consent of both spouses, and once a complaint for divorce is filed, the process can proceed immediately.

How long do contested divorces take in NJ? 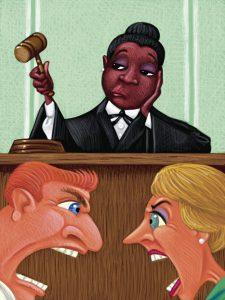 Many divorces begin contested, where spouses are unwilling or unable to accept the other’s idea of an equitable split. Child custody, pensions, the sale or division of houses, and even who gets to keep the family pet can all seem insurmountable challenges when emotions are running high at the start of a divorce.

Fortunately for many couples, common sense and wise legal counsel can often prevail over the anger and desire for confrontation at the outset of many divorces. It is not uncommon for a settlement agreement to be reached well before a scheduled court date, and a contested divorce to end in mutual agreement on a resolution that satisfies both spouses.

In either case, it is rare to see divorces drag on for more than a year.

Do I need to be separated for 18 months to get divorced in NJ?

Another stubborn divorce myth has flowered in New Jersey: spouses must be “legally separated” for 18 months before filing for divorce.

New Jersey does not have a process of legal separation like neighboring New York does. Couples do not need a court order to begin living separately, and while they are free to draft and sign a separation agreement, it is not a necessary step.

Not cohabitating with your spouse for longer than 18 months can provide a cause of action; that is, the legal reason for filing a divorce. However, New Jersey recognized irreconcilable differences as a cause of action in 2007. You no longer need to provide a specific complaint, such as emotional cruelty, or wait 18 months to claim separation.

Instead, a divorce for irreconcilable differences only requires that your marital relationship has been broken for at least six months, and there is no reasonable possibility of reconciling with your spouse.

The NJ Courts Want To Move Your Divorce Along 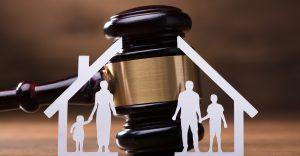 Quite apart from coming to an agreement with your spouse on all issues relative to your marriage is the underlying issue of the court system and how divorce cases are handled internally.  In recent years it has become more and more apparent that courts want cases settled and off the docket, so to speak, within one year of the filing of the Complaint.

So, if your case was filed in May of a particular year, the courts will place great emphasis on getting your case settled or otherwise disposed of through scheduling a trial by March or April of the following year; before your case has reached the one-year mark and, quite possibly, before you and your spouse are emotionally ready to come to an agreement or are prepared to attend a long and expensive trial.

Further, there is the issue of getting cases settled before the end of the court year.  The court year runs from July 1st until June 30th. So, if your case is nearing the one-year mark and June is coming up, there will be a big push by judges to get the case settled or tried before June 30th.

The governmental entity that monitors and controls the court system in the 21 New Jersey counties is the Administrative Office of the Courts (AOC) located in Trenton.  The AOC keep very good statistics on how many cases have reached a disposition (settlement or trial) in any given year. Meeting the AOC statistics for disposing of a certain number of cases in a particular court year could be very important to a judge who does not yet have tenure.  Judges are granted tenure after their first 7 years on the bench, unless they are denied tenure, which is a very rare occurrence.

It is very unfortunate for litigants who are going through what could possibly be the most difficult time in their lives when they are dealing with administrative processes, behind the scenes, that are completely beyond their control.

The emotional connections built through marriage are not easy to let go of. When one half of the couple still wants to salvage the marriage as the divorce plays out, the greatest roadblock to finalizing a divorce agreement is often not a practical objection, but the emotional resistance to ending the marriage. 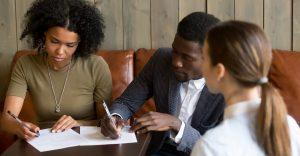 Signing paperwork and finalizing a divorce settlement will formally mark the end of the marriage, a point-of-no-return. Some spouses will try to stall final settlement for as long as possible. Perhaps they raise petty grievances with the division of assets, or ask for some settled issue to be renegotiated.

More often than not this comes from a desire to stay in contact with their spouse.  It can be hard to admit that a marriage is finally over, and dragging out the divorce can be a way for spouses to delay their final farewell. If you are not emotionally ready to accept a divorce settlement, there is a risk of prolonging your divorce.

If you need representation in a divorce or family law matter, contact the Law Offices of Katherine K. Wagner for a consultation.